You are here: Home / Exhibitions / Tinkering with PIE 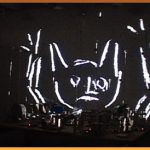 Over the past 10 years we have worked regularly with Mike Petrich and Karen Wilkinson from the Exploratorium, in San Francisco. Mike and Karen have enormous energy, and a unique capability for making things happen in their tinkering workshops. Some of our favourites have been the ‘Sound Automata’ workshops where participants build sound automata and create scratch animations on film. At the end of each workshop the machines were assembled and the film spliced together for a performance. The machines themselves were triggered by the light levels in the film. Pictured above, Nicole Minor, also from the Exploratorium, painstakingly created an animated barecat by scratching the film.

Mike and Karen have built up a wonderful website of some of the projects they developed for the PIE (Playful Invention and Exploration) Network. They have also produced this great worksheet for making Cardboard Automata.

A brand new exhibition, ‘Tinkering’ has also been launched and is based on some of these ideas. It opened at the Reuben H. Fleet Science Centre in San Diego, USA earlier this summer. The exhibition runs until June 7th 2009.