You are here: Home / About / History

CMT started life as a slightly odd crafts shop called Cabaret in Falmouth, Cornwall. It was opened in 1979 by Sue Jackson and sold Peter Markey’s simple wooden toys alongside knitwear and ceramics. 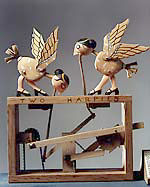 With the arrival of Paul Spooner, it wasn’t long before the mechanical pieces started displacing the other crafts. Sue began collecting and the work she kept remained in the shop. She could see how much pleasure they gave to her customers – even though they were often told that they could turn the handles but they couldn’t buy.

When Paul Spooner made a large coin-operated skeleton (The Last Judgement) for the shop window it was clear that people would pay to bring automata to life and so in May 1983, still in Falmouth, Cabaret Mechanical Theatre began and the customers now paid to turn handles and press buttons. 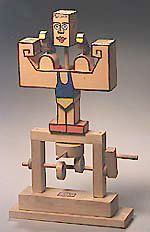 The collection was largely made up of small hand-cranked pieces by Peter Markey and Paul Spooner. For protection most of them were encased and motorised so that they could be operated by push button. Sue also commissioned and bought larger one-off machines like Spooner’s ‘The Dream’. She also added work by Ron Fuller and Richard Windley.

It was soon realised that in order to continue expanding the exhibition it would have to move from Cornwall. CMT opened in Covent Garden, London in 1985, with new work by Tim Hunkin and a little later, Michael Howard.

Over the following decade the world of Cabaret Mechanical Theatre has continued expanding. The shop has a large range of handmade automata which cannot be bought anywhere else, it also sells kits, card cut-outs and videos.

There have been exhibitions in Japan, Europe and the USA including many projects involving larger scale work. The collection continues to grow organically without any preconceived idea in mind, yet the pieces tend to share an eccentricity, a wry sense of humour and a slightly shrewd way of looking at the world. Perhaps what ultimately unified the original collection were the personal tastes and preferences of Sue Jackson, who owned and ran the show until her retirement in 2013 when she passed the reins to her daughter Sarah Alexander.

Cabaret continues to occupy the strange, shifting ground between art, craft and business. CMT was never conceived as a way of making money. For Sue, it always was and for Sarah it still is, a labour of love. It receives no subsidies or sponsorship, yet it helps to support its makers and staff. CMT endeavours to remain a haven of wit, intelligence and individuality in an increasingly homogenous and mass-produced world.

See also: the About page.