The new London arcade of home-made coin operated machines built by enthusiasts – opens February 11th 2015 (twinned with ‘The Under The Pier Show‘ seaside arcade in Southwold, Suffolk) Tim Hunkin’s new arcade of slot machines, including some old favourites from CMT’s Covent Garden days -The Frisker, Test Your Nerve and The Chiropodist. Novelty Automation […] 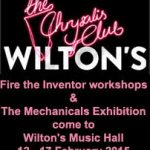 Our Mechanicals exhibition will be at Wiltons Music Hall from 12th to 17th February, as part of a series of making events with Fire the Inventor, for adults and children. 12th – 13th February Making Nights, with wine and music. 14th February, Exhibition and Family Workshop 16th February and 17th February Half Term fun and […] 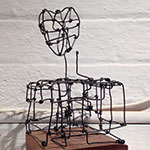 We have two one-off pieces from US artist Aaron Kramer for Valentines. Aaron writes: As a child, I fell in love with contraptions, coin-operated amusements and marionettes. The clack and clatter of machinery plus the visual ‘eye candy’ of mechanisms all gave me a thrill. I have always wanted to make things that moved or […] 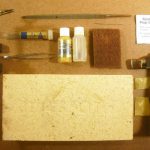 In previous installments of this column, we looked at some methods for cutting brass and techniques for bending brass for your automaton projects. At some point, you will want to join some of these pieces without the use of screws, bolts, or other hardware. In this, the final installment of our series on working with […]