You are here: Home / Archived / The Circus 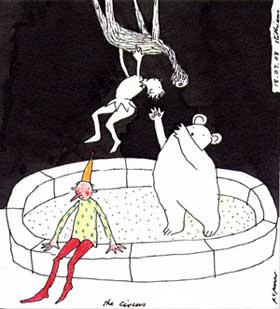 This drawing is based on an exhibit, The Circus, Paul Spooner made for The Modern Automata Museum in Italy. Paul says, “As you can see, there were to be several bears and they were to look much more beano-like than the final effort. The sloth was to take the bun from bear A, transfer it to bear B, then on its next turn pick it up from bear B and give it to bear C. This would have involved a system of cams that raised magnets in a (to me) complicated sequence. Because this threatened to do my head in and because I didn’t want to make two extra bears, I settled for one bear, one sloth and one bun. The magnet is raised in the bear’s mouth once every second visit of the sloth. This is enough to pluck the bun from the sloth’s mouth which contains a much weaker magnet. 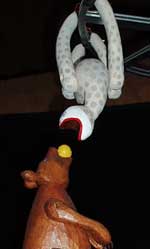 The sloth idea is a development of a proposal for a town clock in the north of England. The sloth was to creep round a horizontal ring once every hour dropping a spherical blob of sloth poo into a bucket each time it passed. People could tell roughly what time it was by counting the blobs in the bucket. One man from the council thought it was a good idea. A lot of others didn’t, especially as they would have had to pay a council worker to reload the sloth every midnight.” 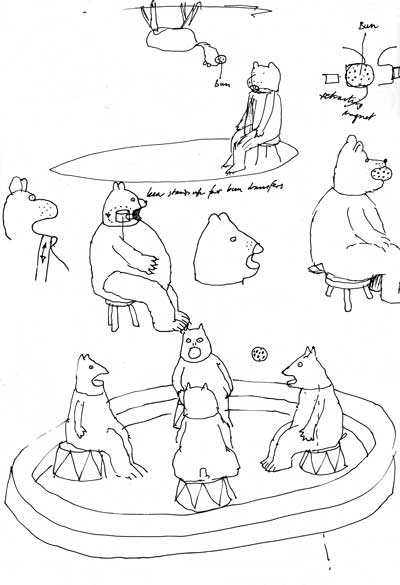