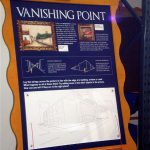 A moving science story
There’s a symbiosis about Cabaret and this little outfit behind the railway line at Acton with the national impact and the global connections that makes you think they must have been joined at the hip, but this is their first project together. Steve Pizzey’s Science Projects are creating CMT’s long-wished-for travelling education show, on the market next month and ready for the road at Easter.

You know how these international organisations work: Steve and Sarah first met in Louisville, Kentucky, in 2006 and saw each other at museum and exhibition events around the world, but it was only last year (in Milan, where else?) that she saw what Science Projects could do (she thinks it might have been the South-Seeking Chariot Steve was steering around the exhibition hall), and the link was made. 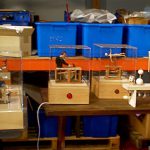 Steve and the SP’s travelling exhibitions manager, Sheila Snowden, are putting together a series of eight units that will explain the mechanics of things CMT’s pocket geniuses make – how cranks work, what a ratchet lift is, cams, gears – and they will be seen alongside the units themselves, by the likes of Paul Spooner and Ron Fuller (here’s a few of them at Acton, giving inspiration to Sheila’s team).

But I’ve got to tell you about this organisation. Steve is a physicist by training, worked on the solar panels on space craft, but in the mid-70s his educative instinct got the better of him and he joined the Science Museum team creating the exploration galleries – long before the Test Bed and then Launch Pad spaces that brought thousands of kids to South Ken that had never dreamed of going before. Then he went to Bradford to help set up what is now the National Media Museum, as deputy difrector. After that, he joined up with the immortal Professor Richard Gregory to set up The Exploratory in Bristol, that brilliant exposition of hands-on science that helped teach science museums around the world how to make their subject fun. That eventually closed in 1999, but long before that Sheila and Steve, who had first met at the Science Museum, had moved on to start Science Projects.

What SP does now is to create portable exhibits to fit into a classroom, aimed at Key Stages 1, 2 and 3, on subjects ranging from why stirrups are important, how the bones in your hand work (with the help of a skeleton), why wood doesn’t make good bicycles and dozens more. They started in a tent, carrying around the country to festivals and town squares – Steve’s dream is for a science exhibition like this in every town centre. It still all goes into the back of a white van, very often with a skeleton sitting in the passenger seat which by some miracle has not so far caused a major pile-up on the M6. 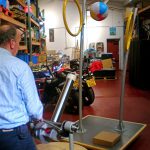 But they also make larger exhibits for museums and exhibitions, and here’s Steve with one of the more popular exhibits, the Bernoulli Blower, with which you have to steer a beach ball through hoops using an air stream. Variations of these didactics go all over the world – when I visit they’re just preparing a shipment for Kuala Lumpur. There’s hardly a museum around the country that doesn’t have what Prof Gregory used to call ‘plores’ made by Science Projects.

In Herstmonceux in Sussex, where the Royal Greenwich Observatory used to be until 20 years ago, you get an idea of what they mean. In the five domes from which astronomers like Patrick Moore used to explore he skies, SP have made the Observatory Science Centre, a kind of nirvana of hands-on science. And astronomy has been brought back to Herstmonceux, with four operational telescopes back in commission.

He’s a dreamer, that Steve, but somehow his dreams seem to come true. But he can see a fully operational observatory in every community. Can you?

Mewsette 1
RoboThesp for space? The Sun seems to think that’s the hidden message in the deal Will Jackson has made with NASA – that the latest development of his amazing invention, the one that can talk in 15 different languages, is destined for the Space Shuttle. Actually, RT3, as we closer acquaintances know him, is going to be doing something much more interesting than doling out vitamin pills and unblocking the waste pipes in space suits. He’s to be the official greeter at NASA’s Houston headquarters.

Mewsette 2
Here’s a happy-end-to-a-search story. Jeremy Daish got in touch, looking for a very eccentric garden in the 1950s and 1960s in Hertfordshire, maybe in Woolmer Green or Datchworth, where the boffin owner had set up pressure sensors in the crazy paving, and as you walked around a clown might pop out, or a parrot would squawk, or a Punch and Judy show would come to life. He remembered it from his childhood but couldn’t find anyone else who could tell him more. We couldn’t help, but he persevered and eventually found the answer: it had been The Woodcarver’s Cottage at Woolmer Green where Harry Macdonald had festooned the little house with painted figures and murals. “Harry had a bell which would ring whenever someone stood on a pedal at the entrance to his model village. At the sound of the bell he would immediately appear out of his workshop and ask for the entry fee”. Any other memories like this?