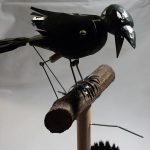 A crow which pecks your finger as you turn the handle. This new piece by Simon Venus is a homage to an automaton by Paul Spooner – ‘A Carrion Crow with its eye on someone’s finger’ – 2011. Mounted on a shoe brush from Deptford Market. Wood, metal, paint. Height: 26cm SOLD. 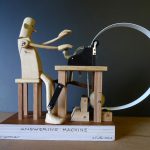 A new one-off piece from Paul Spooner. It’s a machine for undertaking thankless tasks; useful for refusing loans and favours of all kinds, invitations to dull parties, requests to take part in surveys, to look after neighbours pets or children, to rescue victims of crime, to take part in the democratic process, to become a […] 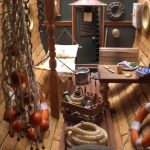 A tremendous new peepshow piece from South American artist Pablo Lavezzari features a perilous journey by boat for only one observer. Turn on the light, open the doors at the front and start cranking the handle… Witness the scene of a shipwreck, on this recently abandoned vessel. The sounds that mimic the roar of the […] 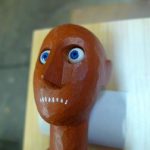 And there’s a box to contain the works. It’s rough old wood from inside a wardrobe – looks OK until it gets a coat of gloss paint, then the roughness really shows up. I’m too impatient to embark on fancy paint jobs and I gave up trying to get the ultimate piano-like finish. You get […]