You are here: Home / Archived / A Big Donor – Part III by Paul Spooner 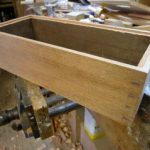 And there’s a box to contain the works. It’s rough old wood from inside a wardrobe – looks OK until it gets a coat of gloss paint, then the roughness really shows up. I’m too impatient to embark on fancy paint jobs and I gave up trying to get the ultimate piano-like finish. You get an impression of shiny perfection if you stay 20 feet away. Reminds me of what Robert Hooke* said in his book about microscopes; that when you look at the works of nature ‘the deepest Discoveries shew us the greatest Excellencies, compared with the rudeness and bungling of Art, which gets rougher the closer you look. Close up my glossy surface looks like a tarmac road strewn with litter. 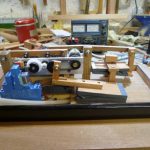 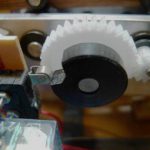 Now all the internal parts are fixed to the base board. There are three bellows; the largest, at the front, connects to the chest cavity via a length of silicon rubber tubing. Behind that is the bellows that causes the eyes to pop and lurking under the gearbox is the bellows that very occasionally sends puffs of air to the towel mechanism. The blue thing is the base that holds the relay which maintains the power until a notch in this cam disconnects the switch. It’s attached to a gear that rotates every 16 secs- so that’s the duration of the performance- quite enough time to get the idea. 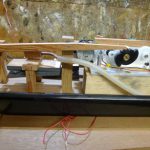 The parrot’s head cam drives the eye-popping action. Motion is transferred from the cam to the bellows by the long wooden lever. Flexible tubing transmits jolts of air from the bellows up the legs of the table, through the drillings in the woodwork to the diaphragm that activates the pushrod that lifts the lever that makes the eyes pop out.

These antique bone letters, which I’ve nailed onto the front, are an example of what’s called ‘The English Vernacular style’. They were quite possibly made for sale to the locals by French prisoners while they sat out the Napoleonic wars in Dartmoor prison. I’ve got a lot of them. A kind young woman gave them to me a long time ago. It’s probably a shameful waste to put them to this use but the other use I put them to- that is getting them out and looking at them every five years- isn’t much better. Trouble is, I’m running out of O’s but there are dozens of Q’s.