You are here: Home / Archived / Night 16 – A Machine for Computing the Names of 13,500 Ventriloquists Dummies by Paul Spooner 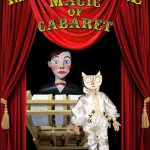 This evening we have a new one-off machine by Paul Spooner. This machine is reminiscent of one of Paul’s very first machines (1969) which was an art criticism machine that he made while at art school. It is A Machine for Computing the Names of 13,500 Ventriloquists Dummies. Paul tells us more about the mechanics and history of the machine below. 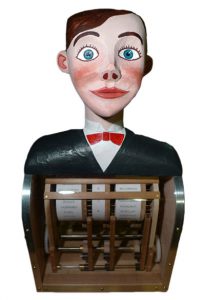 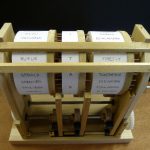 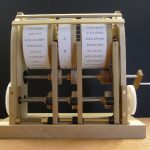 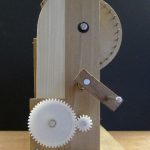 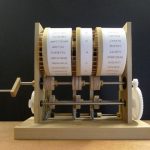 At art school I made a thing I called an ideas machine. It was like a one-armed bandit except that one arm was missing and it displayed words instead of fruit. The three drums rotated then stopped in a randomish way. On the first two drums were adjectives, on the third, nouns. I calibrated it with words I heard about me at the art school. Thus you got combinations like “RANDOM MECHANICAL OBJECT” or “INTERESTING CONCRETE DIALOGUE” or “VIBRANT MINIMAL EXPERIMENT”. There were 36 words on each drum, so it could produce 46,656 different combinations. The machine had a steel frame, two motors, drive bands, magnets and lots of little bits of steel that registered with the magnets to align the words when the machine stopped. It took weeks to make. I found this slide of it, less than half-finished, taken at Cardiff College of Art in 1969.

To me, it has the same forlorn look as the famous picture of Vaucanson’s duck, taken shortly before it was lost. We don’t know much about the fate of the duck but I know that my ideas machine was taken to pieces and made into other things. It was also a lot more rubbishy than the duck.

Now I’ve made another random word machine designed to make up names for ventriloquists’ dummies. The first names are taken from a list of comedy Christian names, then there’s an initial, followed by a bisyllabic surname.

The model for this type of name is that assumed by Groucho Marx in “Duck Soup”; Rufus T Firefly.

Although Colin Pitchfork, the first person to be convicted of murder using DNA evidence and Spencer Broomhead, a man once to be found in the Seven Stars pub in Stithians, lack middle initials, I had to include them because their names are in every other way perfect examples of the kind a ventriloquist’s dummy ought to have.

Too late, I thought of splitting the third drum in two, which would have produced such novelties as Pitchhead and Broomfork. And Stinkpop and Pramstorm and Moonscratch and 895 others.

This second machine took less time to make, has fewer parts and works better than the first. It uses a friction drive which is constantly applied to the 3 cylinders via 3 adjustable conical drums. A slowly-moving camshaft causes 3 levers to interrupt the cylinders at different times thus scrambling the stopping positions. 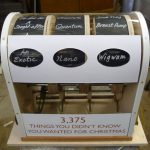 We are delighted to announce that we’ve opened a new exhibition - our first since Covid happened - in Gosport (UK - Hampshire, across the water from Portsmouth). See our blog post for more info and to book your time slot.

Announcing a family workshop which includes an introduction to the wonderful world of automata. We’ll talk together about tools and materials, explore some inspirational machines made by CMT artists and get started constructing our own projects making weird and spooky characters come to life.

During the day the zoom call will be open as a helpline where experienced tinkering facilitators will take a look at in-progress projects, offer new ideas and share tips and tricks. We reconvene in the afternoon to share our work and plan next steps for making and building with automata.

Family workshops are co-educational experiences (so adults, you get to do these activities too!). Best for ages 8 and up, tinkering with a parent or caregiver (in the same house or remotely).