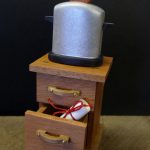 Pulling out the bottom drawer of this small chest of drawers makes two toasted hearts pop out of a toaster. Inside the drawer is the lever that lifts the toast but there is also room for a scroll of paper on which to inscribe a romantic message. Paper is supplied as well as a length […] 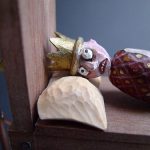 A new piece from Paul Spooner. “If you were trying to make a mechanism that transmitted rotary motion smoothly, here are three mechanisms to avoid. 1). The well-known sliding block mechanism which translates steady circular motion into a wobbly approximation of it. 2). A magnet rotating near another magnet which picks up its motion in […]

The Boyhood of Hitler Watch out everyone. He’s having a big idea. Click image to enlarge.