You are here: Home / Exhibitions / The Clockwork Automataumbrella 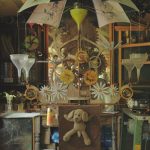 Keith Newstead and Gonzo artist Ralph Steadman have created this incredible new machine, ‘The Clockwork Automataumbrella’. It forms the centrepiece at the Clockwork and Automata Exhibition (18th June to 22nd August 2010). Having collaborated on the critically acclaimed Terry Gilliam commissioned piece ‘Mad God Universe’ Ralph and Keith have teamed up again.

In this new exhibition Ralph Steadman takes on the soft and wonky world of Clockwork. Inspired by the comedy of Jacques Tati, the random and awkward movement of old clockwork toys and a genuine affection for things that just seem a little bit wrong.

‘Clockwork is hard and precise – let’s do soft and wonky’. 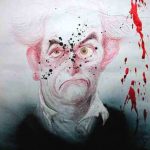 Pushing the boundaries of the traditional materials generally found in the world of clockwork and automata making – Ralph is pushing latex, paper and water to the limits with the help of genius maker Keith Newstead.

Water drips from the large umbrella into funnels, and partly powers the unlikely clockwork mechanism, via a series of tubes and waterwheels. Keith’s vibrant mechanics feature giant flowers and Ralph’s crazy drawings. Finally, an unfortunate rabbit dispenses drinks in an unlikely way. A real conversation piece for parties! 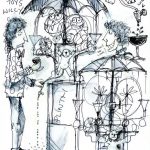 Here are some extracts from Keith’s blog on the process of making the machine with Ralph Steadman.

‘In Ralph’s photo he had some drawings of circles behind the umbrella. He told me he would like one of these to be the sun. We decided that they should form part of some crazy clockwork. A few days later I found some gardening mats that were shaped like sunflowers. The edge of the petals formed perfect gear teeth. I tried to get them to mesh but unfortunately they were not perfectly circular and would not work as gear wheels ( Although they did come tantalisingly close). Undaunted, I used the profile of the petals as the teeth of my own ply gear wheels. I am hoping that Mr Steadman will provide some lovely sun flower art work for the large wheel.’ 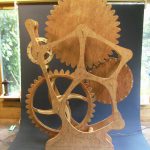 ‘I have always been fasinated with the idea of making a machine that could produce a completely random sound or movement. This is a doomed mission, the reason being that as time and space are infinite, at some point, in some place, all the necessary components will come together to produce me typing this again.

So at some point, my random machine won’t be very random any more.’ 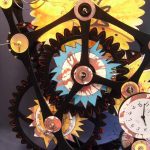 ‘The Automataumbrella is up and running. The water is dripping into the funnels, the sad soft toy is gushing wine from it’s willy, the clockwork is grumbling and grinding. So now it’s just painting and sticking on Ralphs glorious graphics to finish.’

The exhibit is for sale, and can be shipped at the end of August when the exhibition closes. £17,550 (Excl. VAT).