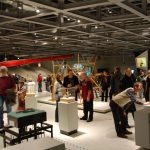 Why are you so good?

So what is the secret, then, of this success? Exhibitions all over the world, rich people falling over themselves to buy, interviewed celebs casually dropping that they’ve got automata at home. But why? I thought I’d better ask a couple of individuals who would know.

For the last few months of 2009 CMT was in Dortmund at DASA – if you really want to know it stands for Deutsche Arbeitsschutzausstellung, or German Safety at Work Exhibition, but don’t be deflected, at the invitation of the curator, Hans-Gerd Kaspars. He heard about Cabaret from his sister-in-law who had seen the travelling show at the Phaeno in Wolfsburg, about 150 miles away, and, having a special sense of humour, she told me most urgently to visit them. You see, it’s a personal thing.

He did not make it but checked out this fabulous website which, along with the recommendation of a colleague who had seen the Granada exhibition, made him decide to invite Sarah and the team.

“I don’t think they are popular in a sense of well known, not in Germany, but once shown in Dortmund they got popular at once. We’ve never ever had such a good feedback in the press, and never that many visitors at comparable exhibitions. I’m sure we could easily repeat the show with even greater success. Indeed, we’re thinking about this…” 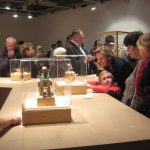 Hard to imagine what exhibition a health and safety museum could show that would be more appealing, but why choose it? There was some fierce chat about why Hans-Gerd wanted to put such a lightweight subject in a space reserved for serious matters; in the nature of the kind of benevolent despot that runs the best of museums, he simply declared ‘automates’ as he charmingly calls then, to be art and ended the discussion. Art is serious in Germany

OK, but what is the connection with H&S? ‘Well, the “useless” automates were the door opener for using automated machines like in the weaving industry in the 18th century, but the real reason is, that they are fascinating and teach a lot about human communication -which is, of course, an important factor in work life’.

The Science Museum of Minnesota is a different sort of client. More of an old mate, really, they’ve been taking the CMT touring show for four years now, where visitors, delighted by the whimsy and inventiveness they have encountered with the pieces in the past, ask specifically for CMT when they come. Bill Maloney is the SMM director of travelling exhibitions – and not only that, he lines up other venues across the States.

“One way to measure their appeal as distributor of the CMT exhibitions here in North America is simply by the number of requests we get for the exhibition” Bill says. “The show has appeared in ten venues since beginning its tour in North America in 2006. It’s been seen by over 1.5 million visitors in the US alone. It has appeared in museums in San Francisco, Chicago and Miami just to name a few cities.”

Bill likes it, he says, because the collection is flexible enough to trundle out to entertain queues but also to fill a 3,000 square foot gallery.

For public appeal, though, the subject matter ‘is right up there with the dinosaurs’, and it’s growing. ‘In some senses the automata genre has been a beloved partner in the Make Movement’- the what? ‘The Make Movement, it’s a snowballing effort by museums, particularly science museums, to provide visitors the resources to discover and learn principles of science through direct experience and creative manipulation.’

I can see that, though I never thought of the work of Spooner, Hunkin, Newstead et al of being worthy. Ah but that’s not all, Bill says. ‘There is really nothing quite like CMT’s automata. To folks in the States they are distinctly British in their approach to humor. That is compelling to generations now intimately familiar with GB’s funny bone through television, movies and stage. For me, weaned on Monty Python, interacting with CMT automata always puts me in a lighthearted, familiar mood. It’s like being in the company of a clever, funny friend.’

So there you are, boys and girls. What makes you great is that you’re the Silly Walks of the exhibition circuit.

The Germans, of course, take their humor much more seriously, but they take it nevertheless. ‘The figures are like a psychological mirror showing the absurdness of life’ Hans-Gerd says, ‘but they are unbelievably funny’.

Mewsette 1
Nice little show at the Flowers Gallery in Cork Street by Tim Lewis. He makes cute little animal robots, three dimensional zoetropes, and bronze prosthetic arms that write romantic graffiti on the gallery wall. Worth a visit, until May 8 (2010). Tim Lewis.

Mewsette 2
If you want to know how most of our makers get their mechanical know-how from, step into the newish clocks and watches gallery at the British Museum. It’s all there – energy, wheels, escapement (conserving the energy) , controller (the movement of the engine), and the end result, which for watch is time indication. Five basic elements. And you can add drama if you see one of the highlights of the gallery, the galleon which in it’s former days sailed across a table firing cannons as it went. But CMT artists have another element too, of course: not much of a sense of humour in most watch movements. British Museum Clocks and Watches [Edit: The BM removed the ‘explore’ section of their website. This page is all that comes up on a current search].