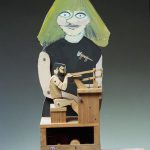 More on the immortal Mrs Jackson
I’ve been reminded that I never finished the Sue story, which seems to suggest that there will ever be an end to the odyssey of the immortal Mrs J, CMT founder and queen of us all. Where did I leave it last time? I was going to tell you about how she was becoming a chess Grand Master, the Japanese gamblers who changed Cabaret’s course, and about her running off into the desert with a novelist. Let’s start with that.

Actually, it starts with Sue’s poetry, her publishers Ambit and her publishing editor, a man called Martin Bax, still a force in poetry circles. This Bax had booked her for a series of platform performances at places like the ICA and the National Theatre. One of the sessions took place at the CMT’s place in Covent Garden, and Sue was giving her The Other Woman which starts

The Other Woman
Wanted bounty bar palm trees that bend on the beach
Where everyone smiles with coconut teeth
And all the oranges are sun’kissed
But bliss is a dove that has no feet
Trick or treat?
He accused her of wanting a written receipt
I told you I’m no good with words
and I’m not a sexy man he said

Also reading, but prose, was a novelist called Geoff Nicholson (Street Sleeper, The Knot Garden, Gravity’s Volkswagen etc). What happened next is described in Nicholson’s ‘sort of travel book’ memoir, Day Trips to the Desert. Sue was, and is, an attractive, short, blonde, pear-shaped woman with a lot of bustling, good-humoured energy and a big smile. Ambit readings, and I seem to have been to a great many of them, are good because the reading is kept to a minimum. This leaves lots of time to pursue lady poets. I pursued Sue, by this time a merry widow. After much drink, a Greek restaurant and a night club with a transvestite floor show (Not my idea, which suggests it must have been Sue’s) the inevitable happened and the pursuit arrived at a happy conclusion. Over the metaphorical shared cigarette that traditionally punctuates these events, Nicholson announced that he wanted to take her to the desert. Any desert, all deserts. “And we’re not going to get lost in the middle of the Australian Outback?” Sue ventured. “Of course not” Nicholson soothed. “Trust me, I’m a writer”. He goes on: “I had always known, indeed had revelled in the fact, that the desert is a place of exaltation, self discovery and revelation. But it is none of those things when you’re lost. When you’re lost, it’s just a big, frightening, dangerous place without any water”. 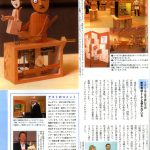 They were lost for about an hour and the relationship never seems to have recovered, but the relationship with Yasu and Yoshimi has endured. These were the two Japanese tourists who had won £2,000 at the Gloucester Road Casino and decided to spend some of it on leather goods in Covent Garden. Intrigued by the Cabaret emporium they tentatively encroached, were enchanted and blew the lot on automata. They are still enchanted and for 10 years they acted as Cabaret’s representatives in Japan, arranging several exhibitions in Tokyo and Otaru. When Sue went to open one of the exhibitions Yasu said her visit was going to be extended because they wanted her to do workshops in the exhibition. She had never done workshops, had no intention of doing them, and wouldn’t know where to start. But, her good will taking over as it always will with Sue, she got on with it, proposing a kind of starter kit to help people make their own. Then they told her that, Japanese house pride being what it is, she could make no mess in the exhibition, so no tools and no glue. What she came up with is the Designing Automata Kit that has become ubiquitous wherever there are automaton exhibitions, displays and demonstrations. Even I can assemble it.

She’s still inventing and making new things. She’s devising 40 nights of new animations, running up to Christmas, as she did last year, and this time many of the animation sequences have been shot by yet another talent in the family, her grand-daughter Akio.

And the chess. It has become her passion, she plays online daily with opponents across the world. Last week one of her partners in the USA told her he thought she was 17, as he was, but despite having to transpose the two digits for accuracy, they’re still playing. Yet she’s venturing into a male-dominated, youth-orientated society with the modern chess world – another opponent told her that this wasn’t a game for old fogies like her, but they’re still playing too. So that anti-foginess might be why she hasn’t quite got to Grand Master level yet, but is soaring at, officially, ‘above average’. 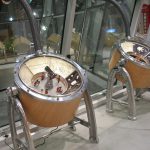 Mewsette 1 As foreshadowed in this slot 15 months ago, Will Jackson’s Engineered Arts and Paul Spooner have helped get Poland’s phase one of the first science museum, the Copernicus Science Centre, opened on November 5 with 350 interactive exhibits including the contributions of our heroes. Will’s EA has, of course, supplied performing RoboThespians to meet, greet and generally make a nuisance of themselves, while Paul has created these automata that look like ship-board binnacles and actually are guides in the humans and the environment gallery. Phase two opens next year.

Mewsette 2 And a note for your diary. The Kinetica Art Fair at 35 Marylebone Road is on February 4th to 6th 2011, a chance to catch up in person with what Cabaret has been up to, with some old pieces and some brand new surprises. With, Cabaret being what it is, Valentine’s Day very much in mind.

Closed, open, closed, open… Virtual! Our Marvellous Mechanicals exhibition may have just closed at Gosport Gallery @SEARCHGosport but you can visit it online: www.cultureoncall.com/a-virtual…

We are very sad to announce that Keith Newstead passed away this weekend (Nov. 7/8) at the age of 64. Keith was a dear friend and exceptionally talented maker. He will be very sorely missed. Our thoughts are with his family at this difficult time. Photo credit: Steve Tanner

We are delighted to announce that we’ve opened a new exhibition - our first since Covid happened - in Gosport (UK - Hampshire, across the water from Portsmouth). See our blog post for more info and to book your time slot.