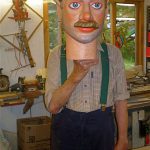 Ron, the village toymaker
We’ve been to Suffolk to visit the workshop of, first, Tim Hunkin, about whom more news later. But a few miles nearer the border with Norfolk in the village of Laxfield is another workshop belonging to another of Cabaret’s presiding geniuses, perhaps the first: Tim’s friend Ron Fuller. 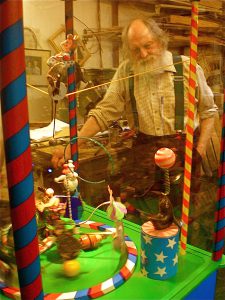 If Tim is an engineer-cartoonist at heart, Ron is a carver-toymaker who could have been the model for Pinocchio’s creator, Geppetto – though this toymaker did not have to make wooden lads, he has three of his own and now a band of grandchildren to delight with his craftsmanship. Here he stands with the circus he first made 30 years ago, and is in such demand since he is putting the finishing touches, he reckons, to perhaps his seventeenth, this time for an American customer. Remember the Ticket Stamping Man that used to be on duty at the entrance to the Cabaret shop in Covent Garden? Ron made that. 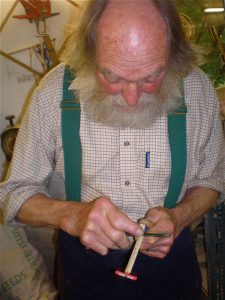 A Cornishman down to his deep burr, Ron was trained at Falmouth School of Art and the Royal College of Art, and went on to teach in colleges and schools. He’d had a career teaching art and model-making, and in 1972 began making wooden toys for a living, developing his own techniques at his bench. While he was at the RCA he met a Suffolk girl, Moss, a painter and print maker now, and they have lived here in this rambling cottage in the woods for 38 years. The son of a carpenter, Ron had been fascinated with making toys since childhood, and nothing is too basic or too complicated, it seems, from the simple folk toys like the Whingydinger, a propeller which turns on the end of a notched stick as a pencil is rubbed along the shaft, to the life-size Adam and Eve pub he made for Cabaret’s Ride of Life in the 1980s. In 1995 his designs were published by Quarto Publishing in Simple Wooden Toys, and you can buy some of his simpler delights at the Southwold shop owned by the co-operative of which he is a part.

You know the model cooper on the eaves of the Chandos pub at the bottom of St Martin’s Lane in the West End, that rolls his barrels out at the chime of the hour? Ron’s, and here he is with a spare cooper’s bonce. This year the telephone people decided to put all Laxfield’s cables underground, and Ron asked if he could have the telegraph pole that was standing uselessly in his garden waiting to be taken away. They were only too delighted, and he’s replanted it with ropes festooning from a turntable at its top, from which the kids who always seem to be around can swing and swoop through the summer afternoon. 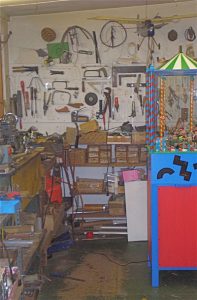 In fact, Ron seems to play in his workshop as much as work. In a corner is an electric motor racing circuit he has made, whose cars, based on 1930s designs, hug the track as commercial rivals never can. Elsewhere are the beginnings of a new piece, an American preacher on-hand instant confessor inspired by the ‘Wash Away Your Sins Towelette – heavenly scented’ sent to him by a friend in the United States. And in the Museum of Oxfordshire at Woodstock you can see the animated creatures he created as Forest Animals – insects, birds, moles, squirrels. ‘Making things is the only thing I’ve ever wanted to do’ he says, ‘and making toys is what I do best’.

Mewsette 1
The news from Southwold is a slightly disconcerting one for Tim Hunkin. The pier for which his Under the Pier Show is such as draw, is up for sale. The owner Stephen Bourne has got planning permission for a hotel at the beach end of the restored pier, and has decided to sell – £6m is the asking price. 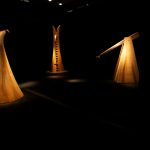 Mewsette 2
If you find yourself in Dublin, make your way to the Science Gallery in Pearse Street, near Trinity College. You’ll have to join a queue, though, because the Biorhythm exhibition is drawing thousands. It’s the gallery’s vision of how to ‘ignite discovery and creativity where science and art collide’. Artists and scientists have collaborated to explain phenomena like turning colour into a soundtrack, and why music can make you cry.