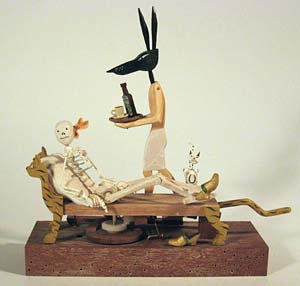 In spite of the depredations of wood-boring insects and flesh-eating bacteria, there seems still to be some life in this wizened mechanical tableau.

Some years ago, in the homes of the middling sort of folk, the cult of Anubis enjoyed a brief vogue as a refreshing alternative to conventional religions. Effigies of Him graced many a mantelpiece until fashions changed and the fascination with mummification and the weighing of viscera seemed just too much fuss.

Time has taken its toll on the fleshly elements of this piece, placing Anubis in a paradoxical position; as Lord of the Mummy-Wrappings, He would have been expected to attend to the preservation of the perishable parts of the remains. Had He not been hampered with that tray, He would most certainly have observed the decencies in the cat’s case, cats being the most revered creatures in ancient Egypt, after the scarab, the ibis, the crocodile, the hippopotamus, the fan-tailed reed-warbler, the poison-dart frog, the giant land-snail, the capercaille and the Norfolk merganser.

Previous — On to the sketchbook

This is an edition of 6 pieces and each has a different inscription.

1. Anubis: Lord of the Mummy Wrappings: Both cats and concubines are enthusiastic consumers of milk. That is why their skeletons are so perfectly preserved. It hasn’t done their skins a lot of good , though. Anubis has managed to stay as sleek and glossy as ever, thanks to his unflinching veganism.

2. Anubis: Lord of the Mummy Wrappings: If Anubis is so damned clever, why is he still here serving that horrible coffee style drink to a girl who is obviously past any concubinary value? Logicians will detect a flaw in the above sentence, who said Anubis is at al clever? He was told eons ago to wait here with the drinks and here, like a fool, he stays. It is to his eternal credit though that he is still as well turned out as ever and he has managed to keep the froth on the coffee style drink.

3. Anubis: Lord of the Mummy Wrappings: No stranger to change and decay, Anubis has had to deny himself the satisfaction of mummifying these mortals. He is under strict orders from the Pharaoh not to lay a finger on them but it’s been such a long time now that the coffee style drink has gone cold and the corpses are beyond any but the most rudimentary stuffing.

4. Anubis: Lord of the Mummy Wrappings: Anubis, whose patience is legendary, is waiting at the concubinal couch ready to administer the essence of eternal wakefulness on behalf of the powerful Pharaoh Horem-harem-horem. Not wishing to waste time, he will give it one more eon before he concludes that something has befallen his employer.

5. Antiques of the Future: You don’t need me to tell you that as time goes by, things get worse. The oaf or bumpkin who installed plastic gear wheels in place of the hand-crafted originals has also seen fit to place a steel core up the middle if the crank handle which renders it almost unbreakable.

6. When we are lying on our beds of mould, where there is neither heat nor cold, when delicious flesh has turned to dust and most of our machines are bust. What comfort is there in contemplation of past glories? Well, at least this thing is still working. Why not subscribe to our extended warranty scheme?