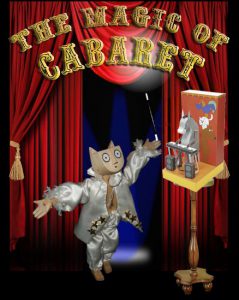 Based on the famous fairytale by the Brothers Grimm, in which a donkey, a dog, a cat and a cockerel decide to become musicians in the North German town of Bremen.
Here we see the donkey tirelessly at the keyboard, as long as the sand keeps running.

This toy is powered by a sand motor. From a hopper in the upper part of the model sand trickles on a lever like an hourglass. As the weight of the sand gets heavier, the lever comes down which makes the forelegs go up. The forelegs and lever are connected by a toothpick as an axle. The sand glides down from the sloping lever and it raises up again. 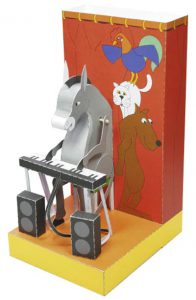 The Musicians of Bremen £3.95 (ex VAT)
Mechanical paper kit by Walter Ruffler
Gallery
Sand toys designed by Ron Fuller were amongst the first pieces to be sold at the original ‘Cabaret’ in Falmouth in 1979. You can see two dancing lady sand toys at either end of the bottom shelves.

We have one of Ron’s sand toys in our touring exhibition at El Parque de las Ciencias in Granada. 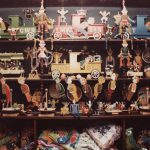 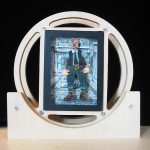 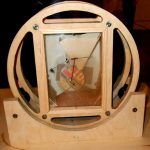