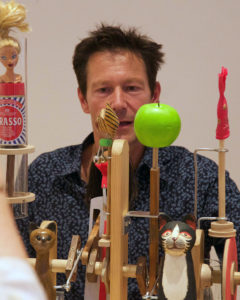 As with many automata-makers and enthusiasts of a certain age, Stephen was first introduced to automata and the niche world of entertainment by mechanical means at Cabaret Mechanical Theatre, in the early 1990s. Being a good mechanic, he was hired for a couple of days a week to help maintain the machines, a welcome part-time job whilst studying history.

He’s been involved with Cabaret on and off ever since, but it’s only in the last few years that he decided to focus on automata as his primary occupation. The turning point was when his flat became more workshop than home, and the decision was taken to rent a studio. Then it became serious – the rent had to be earned. He sometimes works for Cabaret, sometimes as Fire the Inventor and sometimes as himself – the self-employed artist-maker can have multiple identities.

He designs and produces a number of workshop resources, including the ever-popular experimental cam box kit for schools and beginners, a wood and metal kit with crankshaft for more advanced makers, and the attention-grabbing centrepiece installation artwork known as The Ensemble Workshop (unofficially AKA The Longest Automaton in the World – it grows to eight meters in length as people help build it).

His creative process is bricolage and hands-on prototyping. Much of his time is spent hunting down curious objects, components and toys, which are categorised and stored as a library of resources. The creative process is about composition, about finding striking, funny or weird juxtapositions of objects, adapting and hacking them, and constructing mechanisms that heighten the visual impact of the sculpture.

He has had commissions from Cabaret Mechanical Theatre, the Craft Council, and Compton Verney Art Gallery to create interactive and robust exhibition pieces for handling by visitors. He was a design consultant for the Craft Council’s A Curious Turn exhibition, recently had a solo exhibition at Craft Central, London, and was invited to be the first Artist in Residence at Bow Arts RAW Lab in 2017.

He works and lives in East London.