Peter Markey (1930-2016) studied painting at Swansea Art College and taught art for 25 years in secondary schools. He left teaching in 1980 and began making simple wooden automata after someone innocently suggested that he try making his footballer sculptures move. This coincided with the opening of Cabaret in Falmouth where he lived.

Peter had many exhibitions of his mechanical work and his paintings. His work is known for it’s simplicity of design and the use of bright colours. He made little attempt at realistic representation and never carved the wood he used. This means that square-shaped wood results in square-headed people and animals. 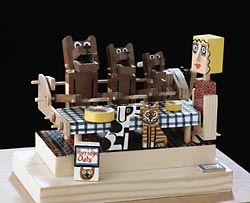 Peter was fascinated by the seemingly ridiculous idea of trying to produce wave-like motions from wood. He made many ‘wave machines’ using a variety of simple but effective mechanisms.

During his later years, in his efforts to find simpler and faster ways of working, Peter often left his work unpainted. Peter claimed that his models have a great tolerance for poor workmanship but despite their apparent simplicity many imitators have failed to produce results of such charm.

He said “that I make things because I can’t stop”. 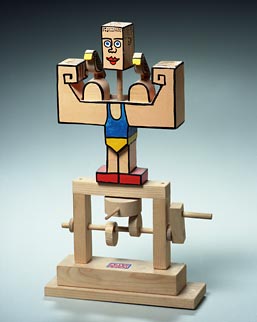 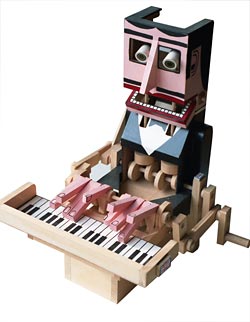