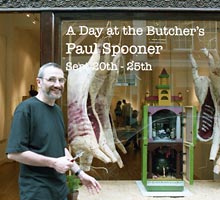 Despite having an engineer for a father, Paul Spooner went to art school and despite receiving an art education from three of the titans of the business, Harry Thubron, Jon Thompson and Tom Hudson, he never became a proper artist but, in his early thirties, took up the then almost extinct profession of automatist.

A series of fortunate circumstances led him from the schoolteaching and lorry driving jobs he’d done after art school; he moved to Cornwall with his wife Sue, he met Peter Markey, who had been making mechanical sculptures and selling them in Sue Jackson’s shop, Cabaret, in Falmouth.

Cabaret became a destination for enthusiasts of mechanical playthings, with works by Paul, Peter Markey and Ron Fuller. Paul installed “The Last Judgement”, a coin-operated machine, in the window of the shop and used the proceeds to buy a lathe.

Since then he hasn’t stopped producing devices, made mostly of wood, mostly small enough to fit on a mantelpiece but sometimes of more ambitious sizes.

Here’s something he wrote:

“As well as all the cars, clocks and other machines that make our lives efficient and comfortable, there are quite a lot of machines that have no practical use at all. Machines that are the antithesis of practicality, made by artists who have no interest in efficiency or comfort. They often make machines that express their anger about the dehumanising mechanisation of war, policing, bureaucracy or about the increasing distance between people who seem always to be on the phone but seldom talking to those next to them.
My machines are even more useless than those because I’m not even angry, having led an easy life in a beautiful country doing pretty much as I please all day. I make machines about things I find funny or absurd, hoping that others will feel the same. Even if I am a little annoyed when I start making something, the feeling has usually worn off by the time I’ve finished.
Better for me to start with an idea that strikes me as wonderfully funny, hoping that some vestige of that survives the making process.” 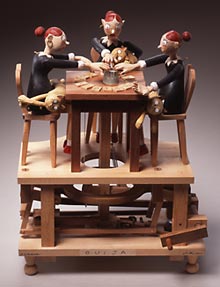 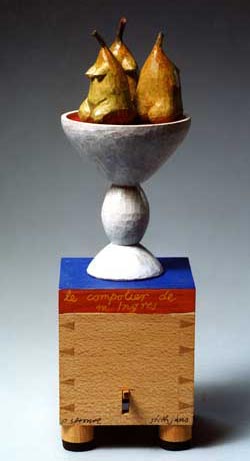 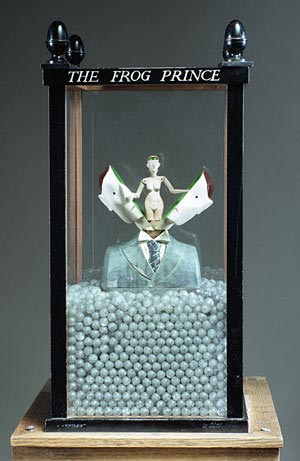