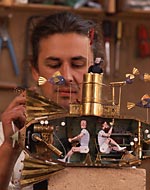 Keith Newstead (1956-2020) studied at Barking College of Art and Technology. After brief careers on a paper round in Finland and as a Graphic Designer, he became a motorcycle despatch rider in London for 10 years. During this time he also made and sold Jewellery.

Keith had childhood memories of the machines in the Penny Arcade at Southend and counted them as being one of the most important influences on his work. When he saw a TV film on David Secrett (Automata Maker) he was inspired to start making his own machines.

His work on display at Cabaret Mechanical Theatre includes The Invasion of the Body Snatchers. This is a peep-show which depicts a train carriage of city-types on their way to work when one of them mysteriously transforms into an alien. 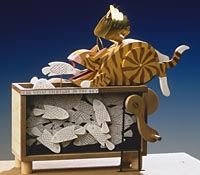 Keith also designed automata which was made by CMT crafts people in limited editions. This enabled him to concentrate on one-off and coin-operated pieces. He also produced many mechanical card cutouts.

There was a time when Keith was described as a newcomer to the field but the reality is that he spent nearly 10 years, prior to that time, acquiring the necessary skills before he was able to produce his automata successfully.

Keith’s obituary on The Guardian website (2nd December 2020). We will update this page again early next year. 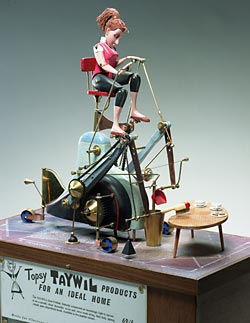 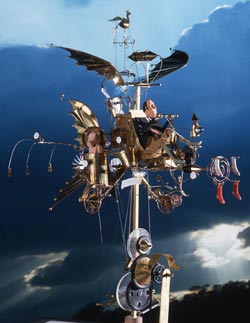