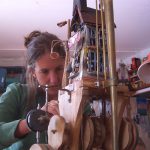 I was born in Fishguard in south west Wales in 1981. I did a sculpture degree at Falmouth College of Arts from which I graduated (not much the wiser) in 2004, and then worked for a recycling company, as a labourer on an organic farm and finally as a waitress. At this point it occurred to me that an art degree left me qualified for very little (especially in Cornwall), so I thought I’d return to making things. I spent some time teaching myself to carve marionettes, but found the idea of figures which could be made to perform, and to act out a scene by anyone at all, even more appealing. I made my first automaton in 2009 and have been enjoying it more and more, despite becoming increasingly aware of the almost unsurmountable amount I have to learn about mechanics, and suspect that I produce pieces entirely for my own amusement. 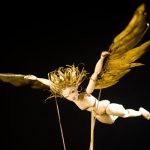 I work mainly in wood, old tins and small old items of the sort found at the back of sheds, having a fascination with the use to which beautifully made but now often obsolete things may be put. The pieces have become increasingly colourful and seem to have recurring themes of naked women, birds and bikes. I am sometimes quizzed a little disapprovingly about the naked women, but I find them the most satisfying of forms to carve, and although I have pondered the question considerably, I’m not sure how to clothe a figure without placing it solidly in a time and a place, which I like to avoid.

I’m obssesive about detail and always find it hard to stop, as I try to illustrate a little of the everyday, the wry and the weird, getting further and further drawn in by all the possibilities, trying to create small pockets of time from which people might briefly forget to emerge.

Recently I’ve been adding dynamos to my work to run sound and light- the range of things that can be achieved merely by the turning of a handle intrigues me, and hopefully helps to give a piece its own atmosphere. It would be wonderful to create automata which appear utterly haphazard yet elegant and thoughtful, both aesthetically and mechanically. I hope to get there one day.

For future pieces I’m thinking of elaborate buildings and goats. I hope these ideas will soon solidify.