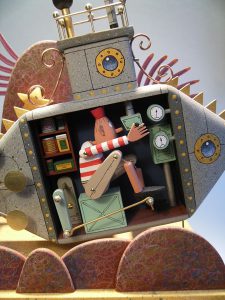 It’s Keith’s birthday so he goes to the computer centre to sort out a programme, pops in to the overall shop for a new pair, answers the phone to me- the things you have to do which you like doing but don’t usually have to time for. Thing about Keith Newstead is that even his most complex pieces, the £1,750 Catcopter for instance, take no more than a week to finish. The little astronaut he made as a Christmas present for the real astronaut, Richard Garriott, took him an hour. “My palette is simple: brass beads, brass sheets, wood, plastic. Keep it as uncomplicated as you can is my motto”.

So Keith is a serious little industry, in his workshop in Automatonville, otherwise called Penryn, Cornwall, and right now he’s in overdrive for the cruise liner industry. “They’ve got a lot of money for painting, sculpture and so on, and now automata” he says, “so I’ve been making them for the ships for about seven years”. Each time there’s a theme, so this time he’s working on New York, the Empire State Building for one, and for the other a building site with construction workers perched on girders hundreds of storeys high. And he has to make them as vandal-proof as he can, because for all the thousands of dollars passengers spend on their cruises, for some reason they can’t resist busting lovely things. The automata can’t be power driven on board ship so that have to have handles, and that is the only part that is not behind glass in the niches made for his creations; so with each voyage there goes a batch of spare brass handles to replace the ones that are nicked. 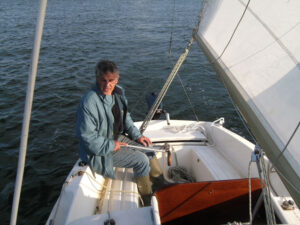 Keith Newstead was a graphic deign student who went to Newcastle to be an artist, where he felt death by boredom creeping up on him. He went to Finland to deliver newspapers, but was in danger of freezing to death there, so came back to the UK to make jewellery. Then he saw a TV programme about automata – “I found the mixture of arts, craft, graphics and movement very exciting” – and made his first piece, which he took along to Cabaret in Covent Garden, where Sue adopted him. When he wasn’t working with CMT he was riding dispatch bikes; that was 20 years ago, and he’s given up the bikes now.

Occasionally he still makes jewellery. For Valentine’s Day he gave his partner, Concha, a bracelet, made from galvanised fence wire. “You can get a really nice finish on it if you polish it right”.

About ten years ago he did some work with the cartoonist Ralph Steadman for a Terry Gilliam film, a piece called Mad God Universe which was a crazily surreal blur of revolving sails, waving hands and bubbles. The piece is missing, but a film of its still exists, and Keith and Steadman are working together again on a new piece for the Frome Festival. It opens on July 9, so he should be starting on it about the end of June.

Mewsette 1
Have you seen Jean-Pierre Jeunet’s chaotic new romp, Micmacs à Tire-Larigot, yet? It occurs to me that Keith could probably make the entire thing as an automaton sequence, have a look and you’ll see what I mean. But the truth, is the movie is already studded with ingenious mechanical devices, the inventions of another CMT favourite, Gilbert Peyrie. Laugh? It’s a wind-up.

Mewsette 2
Steve Guy and the Rose Bruford College took their ingenuity to the last knockings of the Granada show, Automotas: Teatro Mecanico to work with Spanish secondary school children, and I’ve just seen the video. I’ve seen the violinist Enrique Lanz play a duet with a miniature version of himself, I’ve seen the earth go round the moon.,. and I’ve seen an elephant fly. Goes to show, if it’s crazy enough genius can be catching. 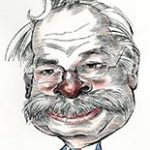